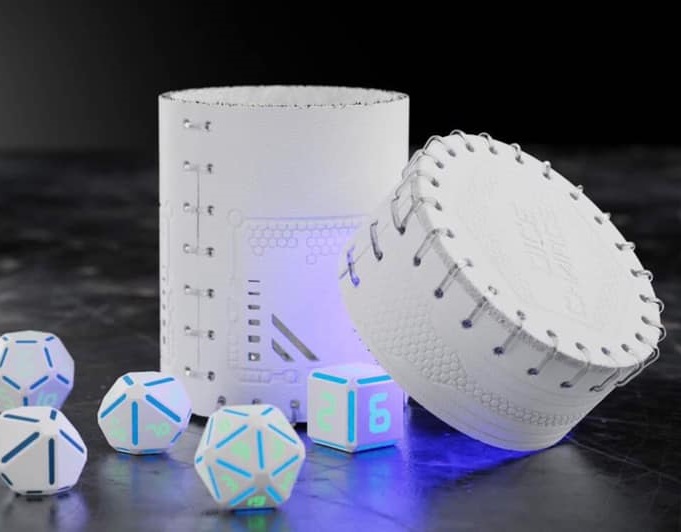 Q-Workshop known for creating unique dice, has an awesome new product on Kickstarter. The Dice Charger is the dice cup that charges glow-in-the-dark dice. Q-Workshop sent me some prototype versions to try out. After some initial battery connection issues from shipping, the UV lights wouldn’t turn on and I was worried for this product. Once the replacement arrived, I was completely impressed. Take a look a the prototype in action for yourself (just ignore my struggles to turn the lights off with no hands).

Q-Workshop makes high quality products and even these prototypes, though unfinished, are well constructed. Features like reflective paint coating the inside and clear string binding the leather to let light shine through shows the well thought out design. My initial worry was the plastic covering the circuit board being damaged by metal dice (such as those included in the campaign). The lid plastic held up to tests with my metal dice sets that have sharper edges and corners than the sets included in the campaign. You’d have to shake pretty viciously to damage the electronics in the lid.

The shake to active feature is novel and gets the job done, but I think after the novelty wears off I would’ve preferred an alternative method to turn it on. A three way switch between on, off, and shake to active would be the best of both worlds. Constantly shaking a dice cup to charge your dice might annoy other players at the table. Being able to charge the dice passively while the Dice Charger is just sitting on the table would be nice. As it is, the Dice Charger performs the intended function really well and everything else is really just personal preference. 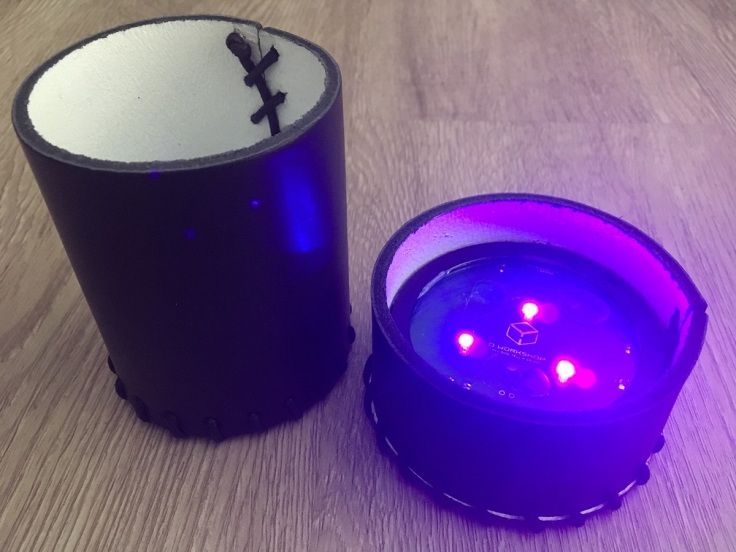 A question I received a lot while showing off the Dice Charger prototype was how is it better than a UV flashlight? As far as the ability and ease of which they make dice glow, they are equal. Where the Dice Charger stands out is working as a carrying case for dice as well as charging the dice. Additionally, the Dice Charger has an extra cool factor. It is a unique dice cup to bring to game nights and show off to your friends. 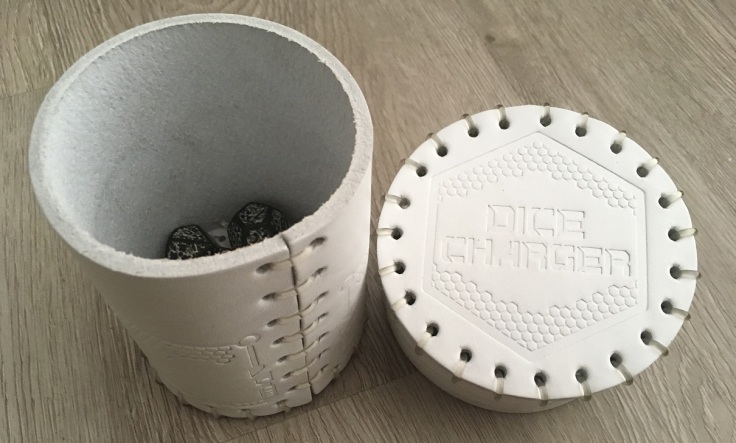 The Dice Charger is a well constructed leather dice cup with the added cool factor of UV lights that charge glow-in-the-dark dice. If your glow-in-the-dark dice aren’t just part of your collection and you actually use them in games, the Dice Charger is absolutely worth having. The glow lasts a good amount of time to make it practical to play with and dice can be quickly charged again by tossing them back in the cup. Check out all the details on the Dice Charger and the new unique dice on Q-Workshop’s Kickstarter campaign.