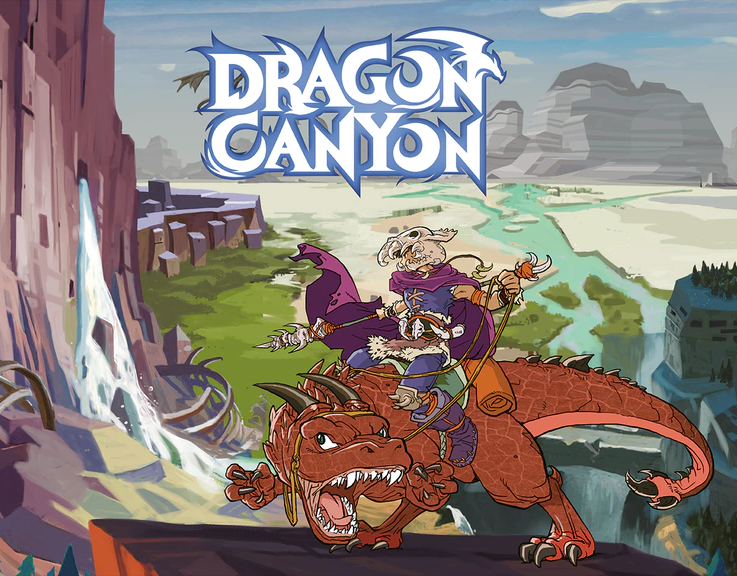 Dragon Canyon is a resource gathering strategy game with combat and hand management aspects designed by Li Hsiao En. Originally published by Sharp Point Press in Taiwan, Sweet Lemon Publishing have launched an Anglicized version on Kickstarter. The game plays 1-5 players in 30 minutes (sometimes longer in my experience) and is suitable for players 10 and over.

How to Play Dragon Canyon

Dragon Canyon is set up by placing the 16 map tiles in a 4 by 4 grid. All players are given an identical hand of 7 hero cards and a player board. Building cards, resource tokens, dice, and the dragon are all place by the board and the game is ready to play.

The aim of the game is to collect resources to purchase building cards worth victory points. The final round is triggered once a specified number of building card piles are empty (depending on player count), after which the player with the most points wins. On the surface, that sounds like countless other games, but there are some interesting mechanics that make Dragon Canyon different.

A harvest festival occurs whenever 4 hero cards form a horizontal, vertical, or diagonal line. These four heroes are flipped face-up and players gain the resources on their heroes and from the occupied map tile. These heroes are then discarded.

There is only one path to victory in Dragon Canyon and that is earning the most points. However, there are several strategic approaches to accomplishing that and multiple layers to every decision. Numerous resources can be collected by triggering harvest festivals, but this can also help opponents gain resources. Two resources are gained from successful battles and there is the bonus of earning a loot card worth 3 victory points. Resources are also gained in the normal way by occupying map tiles. Players can opt to battle their way to victory or play friendly and set up harvest festivals to get all the resources they need for several buildings at once. There is an abundance of options on every turn when selecting which hero to place and where to place it. Simply place it on the map tile for the resource you need, play adjacent to an opponent and try to steal resources you need, play in a spot to complete a line and trigger the harvest festival, or put your hero in the dragon canyon to stomp your opponent preventing them from earning resources. As there are consequences to every decision, there is a good balance between attacking opponents and cooperating with them. Flipping up your hero to use their ability can be beneficial, but it also means that hero won’t earn you resources that turn and it reveals which hero you played. Defeating an opponent earns two resources as opposed to one from the map tile, but removes them from the board which takes you further from a harvest festival and a big resource haul. This is particularly true in 2-player games where harvest festivals are less frequent. In 4 or 5 player games, the board is far more crowded and sometimes it is useful to defeat enemies to make space for more of your heroes in a harvest festival.

Hero cards are placed on the board with the hero identity secret from other players. Certain heroes have special abilities when they interact with a specific hero, such a increasing in strength, nullifying the benefit of a being on a guard tower (also called fortified town), or teleporting when under attack. This allows players to set traps for their opponents. If it can be determined what hero cards opponents’ have left to play or where their heroes are located, there are big advantages to be gained. I really enjoyed this aspect, not only because it was fun to surprise opponents but it kept players engaged. In case someone reveals their hero to adventure, it was important to pay attention when it isn’t your turn.

Despite the fairly lengthy description of how to play and the turn phases (which are not as detailed as in the rulebook), the steps are quick and the game has an enjoyable pace right up to the end. Instead of dragging on, most often players wanted at least one more turn to try to secure a victory. In my opinion, this is the mark of a good game and makes people want to challenge friends to a rematch.

The artwork and components are high quality. The dragon standee looks absolutely amazing. Cards are laid out in a logical way to communicate their strength and what resource they provide. The tiles create a visually interesting board and the resource icons clearly matches the tokens, helping the game be easy to understand and learn as a new play. I expect the Sweet Lemon Publishing to deliver the same quality tiles, tokens, and cards as the original Taiwanese version.

Speaking of the super cool dragon, I found that it was often underutilized. You have this epic dragon standee and it barely gets moved. Especially when playing with only 2 or 3 players, harvest festivals are less frequent and so heroes remain on the board. With only two dragon canyon tiles, in an entire game the dragon might only be moved twice. Once when it is first summoned, then a second time by the player being stomped by the dragon. As I discuss below, it looks like the dragon feature will be a little more prevalent in the updated English edition of the game.

Why Back Dragon Canyon on Kickstarter?

I really enjoyed playing Dragon Canyon, and immediately saw potential to expand the game with additional map tiles, buildings, and heroes. Sweet Lemon Publishing also saw this potential as there are stretch goals for new map tiles, more heroes, and multiple dragons! This greatly increases replayability as you can change which resources are in abundance or make the game favor combat or trading.

Sweet Lemon Publishing has also worked with designer Nick Shaw to create an AI deck to enable solo gameplay. This is described as “more puzzly and calculable” and can also be incorporated in with multiplayer games.

Sweet Lemon Publishing has taken an interesting game and made it even more appealing. A simple resource gathering game at first glance, there is a good amount of choices to mull over. Secret unit deployment, hand management, and dice rolling combat combined into one game with a hint of memory and deduction, there are plenty of aspects to appeal to a variety of players. Highly recommended to medium to light weight strategy gamers. Dragon Canyon looks attractive on a table and offers competitive gameplay with decent depth.