CrossTalk is a word guessing party game designed by Brett Sobol and Seth Van Orden with a focus on subtlety. Published by Nauvoo Games, CrossTalk requires 4 to 8 players and plays in 30 minutes. Released through Kickstarter and receiving over 300% of the funding goal, the game is now in distribution. Thoroughly entertaining, CrossTalk provides mind boggling moments as you wonder how people make crazy connections to a correct guess.

How to Play CrossTalk

Players are divided in two teams (blue & black) and each team selects a new clue-giver for the round. Each round the clue-givers from each team roll the die to select a random keyword, which is the same for both teams. The clue-givers then give a private one word hint to their team. Clue-givers alternate providing public clues visible to both teams. After a public clue is given, the opposing team has a chance to guess the secret word. If the Team Blue clue-giver gives a clue first, Team Black will have the first chance to guess the keyword. This continues until a team guesses correctly, earning 1 point, or the public clue board is filled and no one guessed the keyword. The first team to earn 5 points wins the game, however you can obviously extend games for as long as you desire.

Clue-givers are not allowed to give any additional hints to their team apart from the private clue. They have to try their best to not give any indicators as their team is guessing, facial expressions and statements about a clue’s difficulty are all considered cheating. However, CrossTalk includes two hint boards which can be added to the game to allow clue-givers to better inform their team once per round. This includes things like telling them to combine two public clues, ignore a bad clue from the opponents, or let them know a clue is a synonym or opposite of the keyword. Players within a team will not want to accidentally give any hints to their competitors, so communication is written on dry erase chat boards. 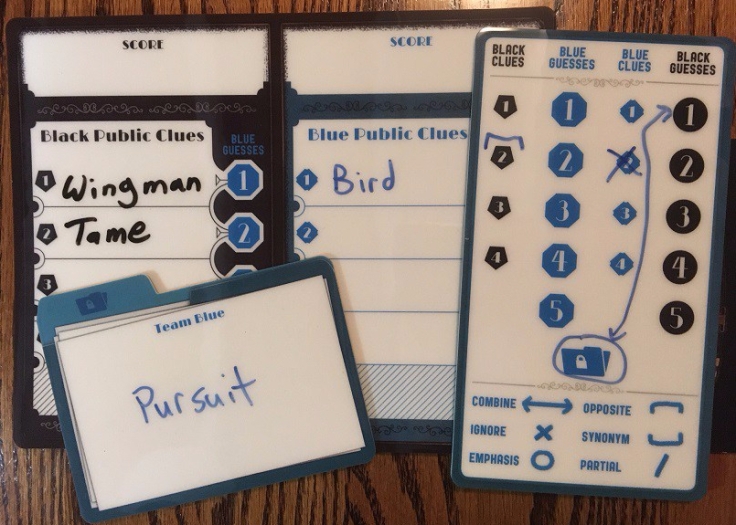 CrossTalk is an excellent party game that rivals the likes of Codenames. Where Codenames is about giving obvious clues to connect as many words as possible, CrossTalk can be more challenging as it requires giving subtle clues. Due to the guessing mechanic that gives opposing teams first guess at your team’s clue, public clue words need to appear vague. The private clue board is used at the beginning of the round to provide context, in the hopes that the vague public clues will only make sense to your team. Even if you think you know the keyword based on the private clue alone (which I have multiple times), you may have to wait for your opponents to guess wrong to get a chance to guess. This mechanic is what really sets CrossTalk apart from other word games.

The 162 double-sided keyword cards each have 12 words that range from objects to famous people or characters. There is a good mix of easy clues such as “Joker” and harder clues like “Ponzi Scheme.” It all really depends on the teams, movies may be easy for me to guess but harder for you. Knowing how your team members’ think can be helpful, but I have played CrossTalk with people I just met. We had a wonderful time and got into a good rhythm with each other that helped us guess keywords on the first or second try. Whether you play with new friends or old, this is a great game to kick off an entertaining party or game night. CrossTalk includes dry erase boards and markers enough for 8 players, but by sharing, the game can be played with teams as big as you like. Even with groups of 10 or 12 people, everyone was still involved and having fun. I personally preferred to be guessing, but I played with some people who continually volunteered to be the clue-giver for the next round. Both positions are fun to be in, but everyone will find the aspect they enjoy most in the game.

The hint boards are a great addition to the game. Without them, clue-givers are forced to watch their team get off track. Using the keyword “Pac-Man” as an example, my private clue was “game.” Since clues have to be one word, I could not put “video game.” Being board game players currently playing a board game, minds immediately went to board games. I would be able to give the public clue “video” which doesn’t make much sense by itself, and use the hint board to tell my team to combine that with the private clue. Giving them “video game” and getting their train of thought back on track. This also keeps the clue-givers involved in the round more than just to say if a guess is correct.

There is not a whole lot else to say about this game. It is a simple word guessing concept that works really well. Super easy to teach, in fact the first time I played CrossTalk, I joined a game midway and had no rules explanation except to guess the secret word.

If you bought someone Codenames for Christmas last year, CrossTalk is the perfect gift to follow it up with this year. Highly recommended for large family gatherings with casual gamers. Great game to warm up a new group of friends at a meetup or to end off a night of intense gaming at a convention when your brain can no longer process complex strategies. CrossTalk is a undeniably fun party game that will be played at my table until the markers run dry or I’ve memorized every keyword in the game. Look for CrossTalk in your local game store or order online.

One thought on “CrossTalk”