Wisdom of Solomon is a reimplementation of Kingdom of Solomon, designed by Philip duBarry, with updated mechanics developed along with Lance Hill. Players are King Solomon’s governors building structures, acquiring resources, and spreading influence across the land of Israel. The governor to earn the most Favor will win the game. This worker placement game can accommodate between 2 and 5 players in under 75 minutes. Funhill Games is currently funding Wisdom of Solomon on Kickstarter. 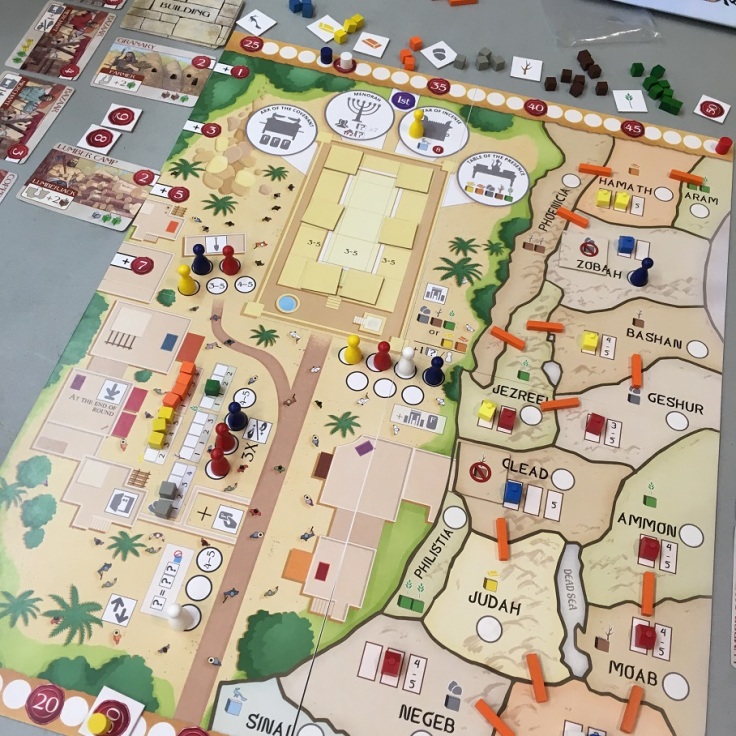 Highlights of Wisdom of Solomon

Even after just my first play, I was already very pleased with Wisdom of Solomon. Many mechanics are familiar to other worker placement games making it easy to pick up. Yet slight modifications and the all too important network building element keep it fresh and different enough for you to want to get it to the table over some of your old favorites. There are several different strategies for earning points, but they all felt well balanced. Nothing a player did was insurmountable, and final scores were often very close. This does have the unfortunate consequence of highlighting the one downside of the game; luck. Temple Tiles vary from 6 to 10 points and are selected randomly when taking the Levite action.

When you lose by 1 point, you can’t help but think if you were luckier and pulled a 9 or 10 instead of that 7 point tile, you would have won the game. However, there are reasons why this small element of chance didn’t adversely affect the game in a big way. First, it affects all players equally. If you could have won with a few more points from the temple tiles, another player can likely say the same thing about the tiles they picked. Second, if your strategy is to buy tons of temple tiles, the average value of the tiles will balance out to 8 points. Luck is only a factor when you have a different strategy and just acquire one or two temple tiles. Lastly, the Levite action is not selected solely for getting points from temple tiles. Players also get to draw a Fortune Card, which can give great advantages in the game or at the very least are worth another 2 points if unused.

Whether you choose to earn points by acquiring buildings, buying temple tiles, or selling at the market, resources are key to winning. Resources can be bought from the market or produced by regions in the land of Israel. Producing one resource at a time isn’t going to cut it, so you need to get Customs Houses and roads on the map to expand Solomon’s network. This is absolutely the coolest part of the game. Resources are produced in all regions connected by roads to a region with a Customs House. Roads are shared, so they may benefit you and other players. 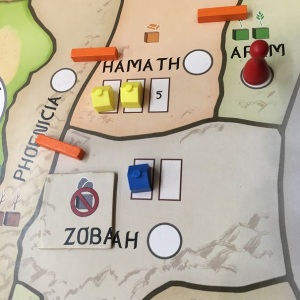 Networks are blocked by other players’ Customs Houses and regions with workers in them do not produce with the network. Workers cannot be played into regions with another player’s Customs House in it, that doesn’t also have one of theirs. So how you place roads and Customs Houses are very important since you can try to block networks or build monopolies on a resource type. Regions have multiple plots for Customs Houses, which vary based on player count, so players will usually have an opportunity to also put their house in a region. Players can choose to build another house in the same region and completely block other players out.

The timing of actions was something I enjoyed about Wisdom of Solomon. Determining when to go to different action spaces to maximize their effect or get there before another player. At the market, resources are bought from any space and sold to any empty space on the value track. If spaces are occupied, it might not be a good time to try to sell at the market. You can also buy and sell with the same worker, converting a good for a net balance of 2 or 3 points. Getting to the Levite space before other players is also important, since the cost increases as more workers are played there. Deciding how long you can wait before you take a Holy Place bonus is also interesting timing wise. Holy Place actions are taken by placing all your remaining workers in the space to get a powerful bonus. The first player to do so will be first player next round and have their choice of the four bonuses, however doing so right away may waste some worker actions. Players need to decide if they can go another turn without other players claiming a bonus with all their workers. Being first player will also help with other timing of actions, such as having first crack at going to the Levite or selling to the empty high value market spaces.

Actions are rather simple which keeps the game flowing quickly. As does having no coins to constantly be exchanging. Resources are purchased instead using your Favor points. The only thing that takes a bit of time for new players to check is which resources are produced by a network. It might be a little slow at first, but after a few rounds most players will have a good understanding of it. Although the advertised game length is 30 to 75 minutes, I found most games took an hour to 90 minutes (with new players) to complete. 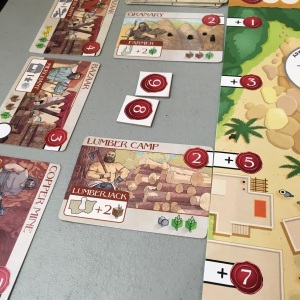 The colorful box art really gives Wisdom of Solomon some shelf appeal and the cel-shaded art style for the building cards was very much to my liking. The mono-colored artwork for the Fortune cards felt like old Biblical illustrations, which fed into the theme. The board organization is well laid out with iconography that makes it easy to understand. Most icons are self-explanatory making it easy to remember the rules and introduce to new players (so you don’t have to keep re-explaining each space). The graphic design is well done, with easily understood building cards that align with the bonus markers on the left of the board and shortage tiles that line up to the board art instead of covering it up. I do wish that the temple tiles had some sort of non-identifying pattern on the back to make the temple in the middle of the board look more interesting. Even something as simple as a brick pattern. All this really just serves to make a good game stand out even more. 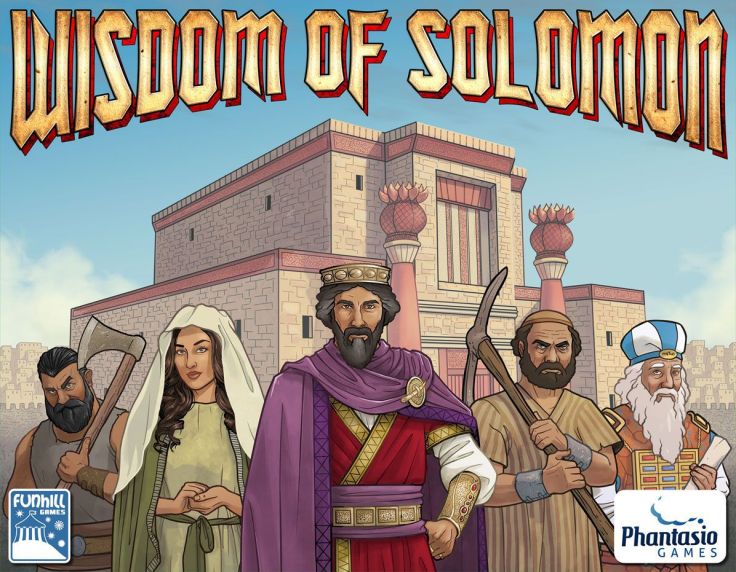 The artwork and Biblical theme gives Wisdom of Solomon a good setting, but the mechanics are what really shines. Wisdom of Solomon is a well-rounded worker placement game with an impressive network building mechanic that offers a fun strategic challenge. With very little negative to say, I absolutely recommend backing this game on Kickstarter.

One thought on “Wisdom of Solomon”