Halls of Judgment is an upcoming game from Baksha Games designed by Sean Scott Garrity. Games last under 1 hour and can be played with 2 to 6 players. Funding will be sought on Kickstarter at a date still to be determined. For updates, follow Baksha Games on Facebook.

Halls of Judgment has a simple bidding mechanic which creates some interesting albeit repetitive gameplay. Players have 8 good cubes and 8 evil cubes, and can only bid cubes of one type. Players bid on good, evil, and neutral soul cards. The most good cubes bid wins good souls and the most evil cubes win evil souls. Where it becomes interesting is the neutral souls. The type that trumps the other is determined by what all players bid. The type in the majority is trump for that soul and the player with the most of that type wins. For example, one player bids 6 good cubes, and the other two players bid 3 and 4 evil cubes. Evil would be the trump type and the player who bid 4 evil cubes would win the soul. Souls are bid on one by one, with all the upcoming souls for the round in a visible queue.

The number of icons on cards is also important. This will affect how many points are earned when claiming the soul, but also how many cubes it takes to activate them as a herald each round. Activated heralds earn 1 point per cube required to activate them. A card with 4 icons will earn 8 points right off the bat, but requires 4 cubes to earn points from it again. Cards with less icons will be easier to activate with cubes you didn’t spend on bids during the round. The last aspect of the game is trying to collect a balanced group of souls. If you have an equal number of good and evil icons on your collected soul cards, you score 20 fairness points (see example below). The more unbalanced, the less fairness points you score. 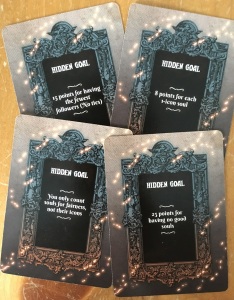 Points are also earned from hidden goal cards. These cards ranged from scoring more points for different souls to end-game abilities to modify how you count your fairness score. The good thing about the hidden goal cards is that two are dealt to each player and they don’t have to select which they want to keep until after the third round. This was nice because new players never have a good idea of what objective they should select in games where they pick during setup. The bad thing about the hidden goals were how unbalanced they were. “25 points for no evil souls” sounds nice, but means you get a fairness score of 0. While “2 points for each black icon” can easily earn plenty of points also, while still allowing you to get a perfect fairness score. The abilities, such as “you may ignore 1 soul for fairness” or “you only count souls for fairness, not their icons”, only make it easier to get a perfect fairness score (which wasn’t that difficult to begin with) and do not earn any additional points.

What I found most fun was bluffing how much you were bidding. Making noise picking up cubes behind the cover of your throne, but not actually holding any. Revealing an empty hand while opponents overspend a ton of cubes on a soul card you didn’t want was very satisfying. Some of the game does come down to seeing what cubes other players have remaining and simply bidding more than they could possibly bid. If you want players to have to pay closer attention to what opponents bid during a round, spent bids could be put in a central pool to avoid easy counting of what players have remaining.

As Halls of Judgment is a rather simple game, I don’t believe it is selling itself on game mechanics alone. The artwork and theme will be a factor in drawing in players. The prototype cards had decent artwork for the most part, but felt empty with blank picture frames. It would seem that the intention is to fill these picture frames with faces of Kickstarter backers. This is neat for a Kickstarter exclusive deck or special card substituted into your own game, but not artwork I really want to play with. The game would be much better served to have creepy ghost portraits or perhaps to save on art costs, public domain Renaissance paintings. The thrones for each player served their purpose to obscure the bidding process, but I would’ve preferred folding covers, rather than piecing thrones together each game. The colors for these thrones were hard to distinguish which player was which when scoring points, but my understanding is this is already being adjusted to be more color blind friendly. Adding more unique character art to represent the different Gods would serve to increase the appeal of the game.

While I enjoyed the bidding mechanic and bluffing my friends, after several plays of Halls of Judgment, the game becomes quite dry. Bidding becomes repetitive with little else in the game and players tend to complain about getting a raw deal of goal cards when they lose (sometimes rightly so). Halls of Judgment is little more than a filler game to play from time to time when players need to switch their brains off. For my taste, the game is too long for how simple it is and I have a good stack of more appealing filler games to choose from already. The main redeeming factors being that Halls of Judgment can play with up to 6 players, is easy for new gamers to pick up, and it is different from the hidden role and party type filler games owned by most people.