One of the biggest hurdles for aspiring game designers is acting on their ideas and prototyping a design. Hard to say whether it is the fear of people disliking the game, or the lack of resources to get started. Either way, simply making any game (good or bad) is the only way to improve and come up with new game ideas. Often it isn’t until a game is prototyped out that you realize a concept that sounded amazing on paper just won’t work practically and needs to be tweaked. It was with this in mind that I set out to create a board game design jam to help new and experienced designers alike. Working with Mark Ellis of the Vancouver Playtest meetup, we created aVANt-Carde.

The aim of the event would be to not only give board game enthusiasts a chance to design a playable game, but give them the resources to continue making games outside of the event. Attendees could come to aVANt-Carde, get their creativity flowing while making a game and then leave with a component kit, design exercises, and more. We wanted attendees to have the experience of creating a game and be inspired to follow through on more of their ideas. Perhaps even meet potential collaborators to design games with. Our vision for the event would not have been possible without the support of sponsors and we were thankful to have the support of everyone we reached out to. Panda Game Manufacturing supplied component kits for attendees to take home, as well as guidelines on designing a game for manufacturing. Our FLGS, One Stop Shop Cards & Games, donated gift certificates to award the team with the best design. Designers Emma Larkins and Shawn Stankewich provided us with their #GAMEDESIGNDAILY workbooks for attendees, which have exercises to inspire game ideas and get a better understand of what makes a good game. The Game Crafter and Pressman Toy also offered to support, but postal delays prevented us from receiving their supplies. Which was a lesson learned by us to ensure we get all materials well in advance of the event date.

Another difficulty when designing games is focus. Our minds can run wild with all the different possibilities for theme or mechanics that could be included. Having to complete something in 3 hours forces decisions to be made quickly, limiting the hemming and hawing over every aspect of a game. Sometimes you need to make a choice and just test it out. We took this even further at aVANt-Carde by providing limited choice for theme and constraints to facilitate some creativity and offer focus to the design. Before you can create out of the box designs, you have to design something within the box. Teams rolled two dice and could use those numbers to select subsets of themes and constraints. These themes could be fairly specific like zombies on a plane or generic like deep space. The constraints weren’t strictly mechanics but rather other limitations like cards with multiple uses, tiles that rotate, or uses a sense other than sight. To make things fun and interesting, we also had teams draw random components from a bag (including a disco ball, test tubes, magnets, and fake mustaches). See some of the designs teams made below and a full photo gallery on Facebook.

This Tsuro inspired game looked really cool, I wish I had time to try it out. The only downside to running the event, was not getting to play the games. 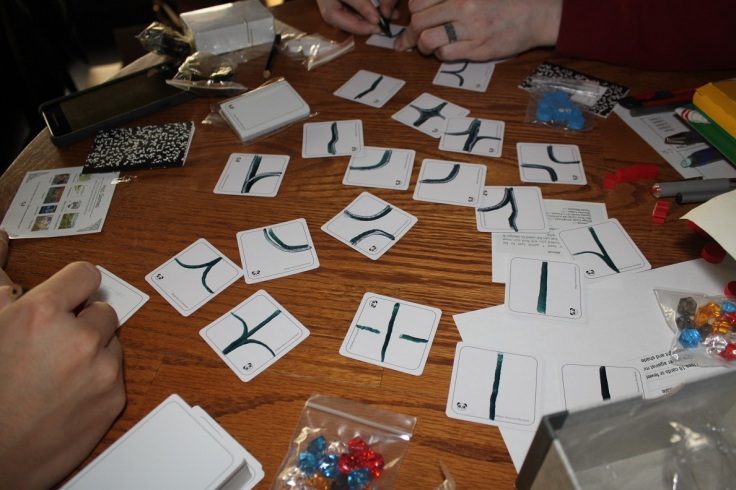 One team managed to make use of the disco ball they pulled from the mystery component bag. Light shone on the ball reflected diamond shapes onto the table and any gems they touched could be selected by the player.

Teams got a taste for playtesting their games when they taught it to another team. 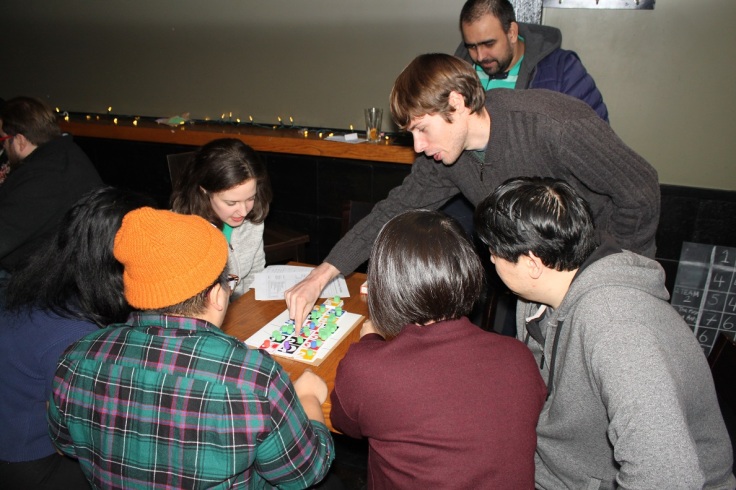 I can safely say that aVANt-Carde was quite the success. The venue was packed with people and we received tons of positive feedback. It was interesting to see how teams worked with what they were given to come up with games and satisfying to see people having fun at something we worked hard to organize. I hope what you take away from sharing a little about aVANt-Carde is how beneficial attending a local design jam can be. If your community doesn’t have a board game convention or design jam you don’t need to be a prolific designer or influential personality to start one up. I wanted an event that would help me create games and dozens of local gamers felt the same way.

If you attend or even organize a board game related event in your area, I’d love to hear about it in the comments. Share what makes it special or how it has helped you.